The Islamic horizon in Area BA-1 was about 2 m thick and contained several pebble floors, which allowed distinguishing four main occupation layers. A vast extent of looting pits prevented the reconstruction of any architectural structure. Noticeable was a concentration of tanoors, at least 13 ovens just in layer 3. Most of the findings derived from deep storage or/and garbage pits, such as different types of pottery like cooking pots, storage jars, and thin ware. A lot of the excavated jugs showed a decoration of modeled ornaments while many bowls and plates were glazed. They give evidence for a dating of the horizon from the early Islamic to the Medieval Period. 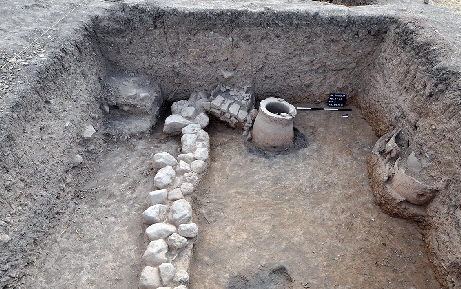 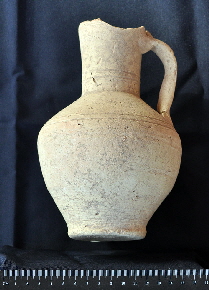 The Iron Age horizon was badly affected by illicit digging as well as by several deeply interfering Islamic pits. Two layers were distinguished:

Nine burials were exposed in the younger layer. The skeletons showed a crouched position, and just a few grave goods were found. One of them was a bronze kohl tube dating into the Achaemenid Period and providing a terminus ante quem for the older layer.

This earlier layer consisted of an extended, two-phase rubble pavement, which was the only recognizable architectural feature from this period. Two bovine skulls, probably offerings, were lying on the floor of the older phase. A similar paving was also excavated in Area BA-2 in the same height a.s.l. Pottery from this context included characteristic types of bowls of a fine reddish slipped ware. Comparisons are known from Urartian and Median sites in NW Iran and give evidence for a dating into the Iron Age II (c. 8.-6. century BC). Some of the BA specimens were decorated with applications of little bovid heads and patterns of small impressed circles. 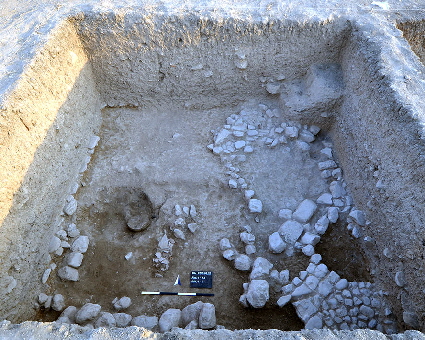 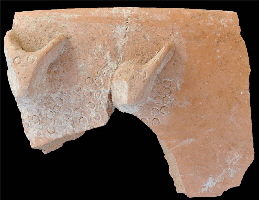 Iron Age pavement, and a fragment of reddish pottery with applications.

The LBA in Area BA-1 was underrepresented; a thin layer at the eastern slope provided only a few findings. A clay cone might have been part of a wall decoration known from Middle Assyrian and Old Babylonian official buildings. 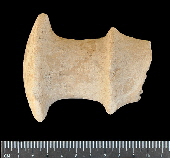 For the MBA horizon at least two main occupation phases were distinguished. The older layer consisted of architectural structures, into which six graves were deepened from a younger stratum.

The building remains consisted of mud brick walls connected to pebble and mud floors belonging to two different units. They were heavily disturbed by several Islamic pits and slope erosion, and as a consequence the definition of particular rooms was difficult; just a few installations like storage jars and a stone threshold were excavated. The eastern house revealed a pebble floor with two phases in each of which a cylinder seal was found. One of good quality derived from the older and a less elaborated one from the younger level, both depicting an adoration scene with date-palm altar typical for the Ur III period. Based on stratigraphic evidence the seals might be interpreted as heirlooms, because the floor covered a tomb with its findings dating to the Isin-Larsa and early Old Babylonian period. Even though the burial chamber had been looted in ancient times, it was still well-equipped with grave goods of at least six individuals buried inside. Bronze weapons, jewelry, metal and pottery vessels have their equivalences in the Diyala and Hamrin region as well as in middle and northern Mesopotamia and even western Iran. The tomb itself was constructed as radial vault of pre-shaped burnt bricks on a socket of lime stones with dimensions of 2.50 ×1.40-1.50 m and about 1 m in height, having its closest parallels in southern Mesopotamia. Its entrance was closed by corbel vaulting; inside the shaft animal offerings were deposited, and on the bottom of the pit a pot burial of a child was located. A similar tomb was excavated in Area BA-2 in 2013.

After the building with the tomb was abandoned, younger graves from a higher level were cut into the older structure. Three grown-ups and one child were buried in crouched position in grave pits, whereas two babies were laid to rest in pots. The very few funerary goods prove that these burials also belong to the Old Babylonian period and obviously represent a later phase therein.

A burnt mud platform was excavated west of the younger MBA tomb. Its southern half was characterized by a well preserved and extremely hard surface, extending into the lower part of another slightly crescent-shaped gully running through the center of the feature. Ashes and traces of burning indicate that fire must have played an important role in the use of platform, and in connection with the (water?) channel the whole structure might be interpreted as work space. 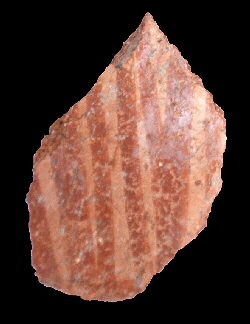 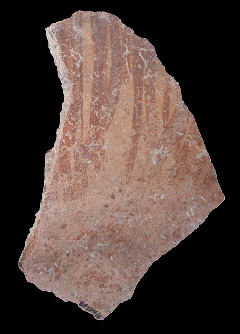 Painted pottery from the transition between Middle and Early Bronze Age.

Older stone foundations dating to the Akkadian or Post-Akkadian period were exposed beneath. In the eastern part of the sounding there was an open area, apparently a courtyard, with a gully running through from West to East. Its northern half was paved with stone boulders and pebbles, while the southern half consisted of a pebble floor framed by stone slabs along the channel and a narrow stone foundation at the eastern side. Four large rooms extended to the west of the courtyard. A triangular space between them contained two big tanoors. The radiocarbon date from the ash fill of the southern oven provides a span from 2140 to 2030 BC. Another 14C sample from the occupation layer covering the courtyard pavement revealed a dating 2030-1890 cal BC. 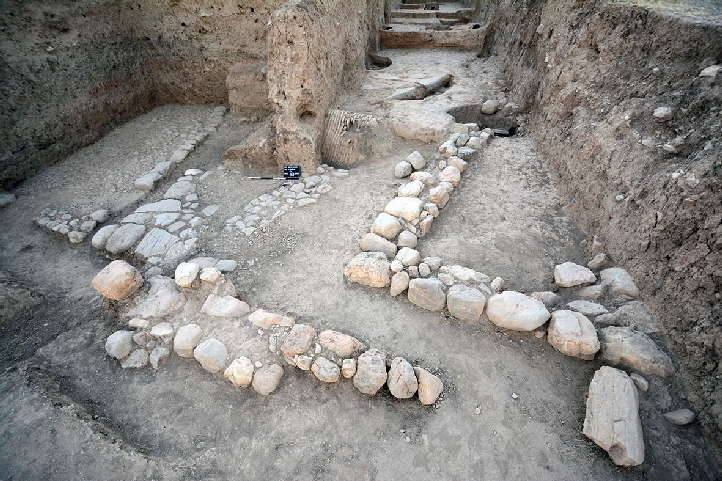 Early Bronze Age courtyard with stone pavement, and the mud platform behind the vaulted tomb.

Early Bronze Age stone foundations, and ovens between the rooms.