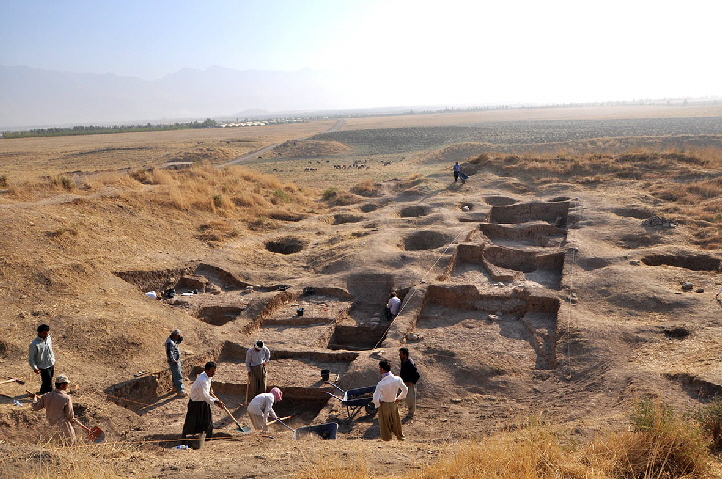 Starting season 2011: looting pits in the area of the previous Iraqi excavation.

The Islamic horizon in Area BA-2 was like in Area BA-1 badly damaged by looting pits. About 20 graves of a cemetery were situated directly beneath the surface, whereas many storage pits reached deep down into older layers. Some tanoors were also found, but just very few cohesive architectural remains. Pottery was unearthed most frequently; other small finds included glass arm rings and vessels, glazed terracotta and shell beads, and some metal objects. Noticeable is a nearly complete specimen of four-legged terracotta-basins decorated with glass inlays; fragments of these were not uncommon in the Islamic layers at Bakr Awa. 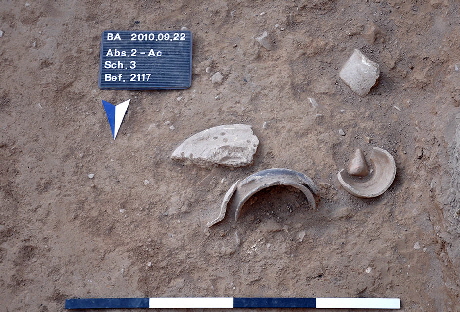 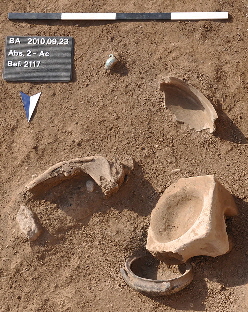 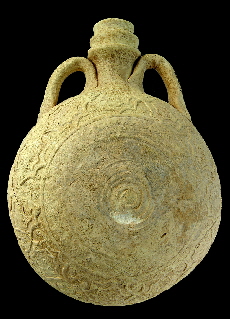 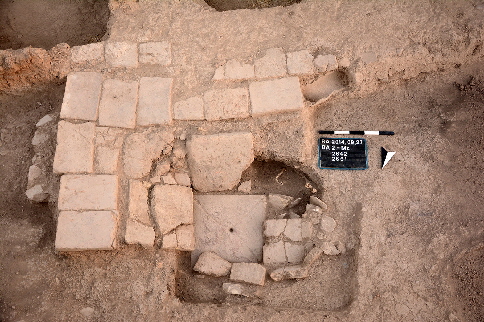 Brick pavement and drainage instalation in a bathroom built deep into the Late Bronze Age layer.

Two Iron Age layer were distinguished: The older level consisted of a stone pavement similar to that in Area BA-1. In its context was also found fine reddish-slipped pottery, some fragments decorated with applications in shape of bovine heads, dating into the Iron Age II.

The younger level contained two graves disturbing the older pavement. The first one was a double pot burial of a baby, equipped with a small handled jar, a bronze hair ring and fragments of a toggle pin. The second one was the pithos grave of a mature male person. The storage jar in which he lay in a crouched position was closed by an upright standing burnt brick. The man was poorly equipped with a frit bead and one bowl found under his left hand. The vessels from the graves can be assigned to the Achaemenid period. 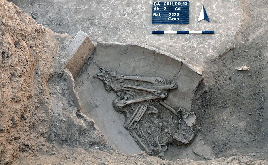 The LBA layer comprised architectural remains of a building; two of its rooms were excavated in large parts. The western room was obviously used for storage purposes, a large number of broken pithoi and smaller other vessels lay scattered on the floor. Two beakers are of late Kassite type, but as they bear striking resemblances to specimens from MBA contexts at Bakr Awa they also seem to represent continuity in the material culture of both periods.

There was no direct connection to the adjacent eastern room, which was accessible through a door in its southern wall. A mud-and-pebble floor was traced throughout the whole 3 m width of the room. On top of it were discovered two cylinder seals, both made of frit and of characteristic Mittani styles: one was of Common Style and one of Cut Style. During the LBA period Bakr Awa seems to have been a place of contact between the northern Mittani and the southern Kassite spheres. 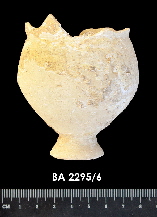 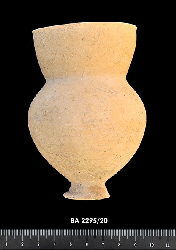 Further west a facade with two buttresses appeared, obviously the remain of an official building. Only a small corner of the room behind could be investigated, it was filled with ashes and burnt rubbish. Fragments of 16 partly burnt cuneiform tablets and two bullae seem to derive from this building originally. They were found in secondary contexts, as the whole vinicity was badly affected by younger pits and deepened structures. The Middle Babylonian texts are of administrative and religious character, they add to a collection already exposed by the Iraqi team in the 1960s (here is more about the texts). 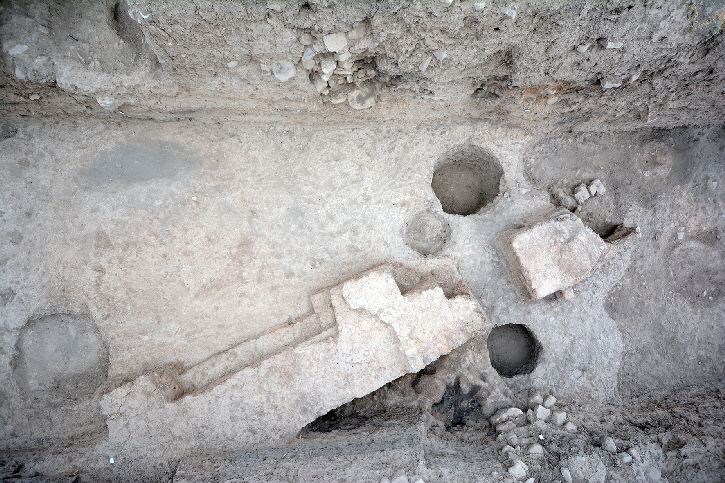 Like in Area BA-1 at least two layers were identified in the MBA horizon:

The older level is represented by a large private house with two occupation phases of which the younger one was already documented by the Iraq excavators 50 years ago. It is a typical courtyard house structure characteristic for southern and middle Mesopotamia during the Isin-Larsa and Old Babylonian period. The core of the building consisted of a large main hall (R105) with adjacent reception hall (R103) and a square courtyard (11 x 10.5 m) in front. The northern, eastern and southern sides of the house were flanked by smaller storage and kitchen rooms. Due to slope erosion the entrance situation in the east could not be further clarified.

The building site was partially leveled before the mud brick walls of the house were erected. The floors consisted of a pebble sub-layer covered by mud plaster. Burnt bricks were lined up along the western side of the courtyard and as threshold in the entrance to the reception hall, where also some patches of pavement were observed.

Noteworthy installations in the main hall were an altar in the northwestern corner and a rectangular hearth (1.25 x 1.84 m) in the center of the room. The service units on the northern and southern side of the courtyard provided large storage vessels and several (tanoor) ovens. A pot burial of a baby was deepened into the northwestern corner of one of the southern chambers (R98). 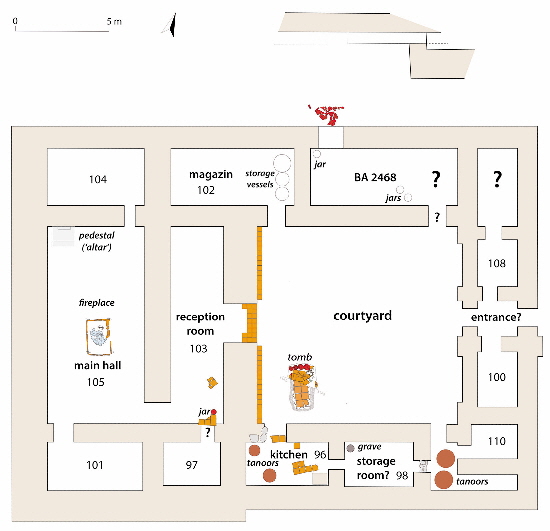 Residence building from the Isin-Larsa Period.

During season 2013 an intact tomb was excavated under the southwestern part of the courtyard in a depth of about 1.30-2.45 m. The construction technique was the same as in Area BA-1, a radial vault built of pre-shaped burnt bricks on a lime stone socket. The southern rear wall was also made of stones, whereas the northern entrance was closed by a corbel vault of square burnt bricks, which were also used to pave the floor. With c. 1.90 x 0.75 m and 0.70-0.80 m in height it was of smaller dimension than the tomb discovered in 2010. At least two individuals were buried in the chamber, a mature woman and c. 14-year-old boy. They were well equipped with pottery vessels, bronze objects and meat offerings. The western half of the floor was cleared and obviously prepared for the next burial, because bodies and grave goods were shoveled to the eastern side. All the more remarkable that the entrance was thoroughly closed, and pottery vessels and a dog had been sacrificed in the upper part of the shaft.

It is highly probable that the house was abandoned intentionally; its inhabitants seem to have cleared the rooms, and in consequence almost no small finds except for pottery were discovered. After some time the area was used for burial purposes. Like in Area BA-1 graves belonging to the younger MBA occupation phase were dug into the older architectural remains. Twelve graves, two of them double burials, were exposed during the last four seasons. Ten grown-ups and four childern were laid to rest in crouched position, but without regular orientation. Usually they were equipped with pottery vessels; some individuals also possessed bronze objects. The grave goods give evidence for a dating to the (later) Middle Bronze Age.

The EBA horizon consists of at least ten layers; during season 2013 virgin soil was reached at 570.30 m a.s.l.

The upper layers are represented by stone foundations, some with remains of the rising mud walls, dating to the Akkadian/Post-Akkadian period. East of them there obviously was a production area characterized by several (tanoor) ovens and fire places in a 1 m thick ash layer with big lumps of slag.

Just below the MBA house there was a single-room shrine, a so-called Herdhaus of c. 3.10 x 5.30 m, oriented east to west. The outer western wall was complemented by two projections; a mud brick altar coated with sherds and clay was attached to the northwestern corner of the building. The entrance with its threshold of a longish paver flanked by two stones, one being a pivot stone, was situated in the western part of the southern wall. East of the door there was a niche, its filling mingled up with many pottery sherds. The original floor of the sanctuary was a flagstone pavement; a mud bench in front of the eastern part of the northern wall was the only preserved installation. In some places a covering with sherds under a 10 cm thick clay plaster was observed on the inner and outer walls. The shrine was surrounded by a pavement of pebbles and pottery sherds; in this context five fireplaces were found, one of them re-used for burial purposes. A 14C sample from the upper floor of the shrine was dated between 2270 and 2040 BC. 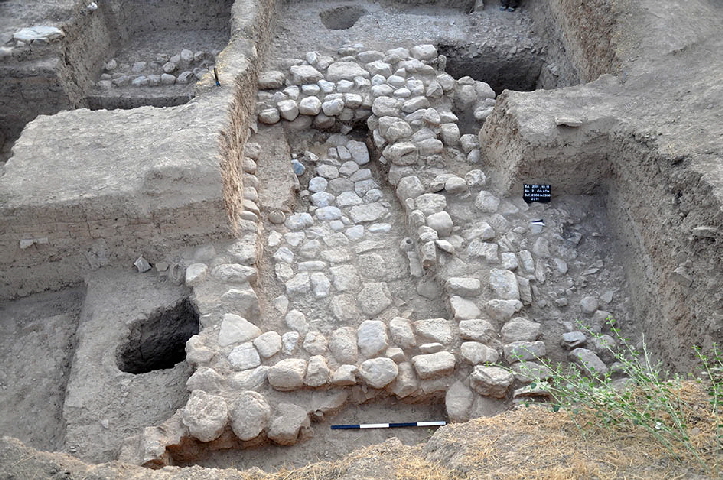 Small shrine from the Akkadian or Post-Akkadian period.

The deep soundings revealed several floors and remains of mud walls. They can be dated to the beginning of the EBA, i.e. Early Dynastic I & II, and even a Jamdat Nasr occupation can be assumed (2890-2860 BC cal.). In their contexts many sherds with Scarlett Ware-like painting were associated with beveled rim bowls. Furthermore, the fragment of a storage jar bore a seal impression on its rim, which is typical for the Jamdat Nasr and ED I period in the neighboring Hamrin region.

Painted and sealed pottery fragments from the deep sounding.