The citadel was less affected by looting than the lower city. Instead, there were traces of recent military presence and war destruction. In season 2011 Area BA-3 was opened in the south-eastern part on top of the mound, where no major disturbances of the surface were obvious. Twelve layers dating from modern times back to the Iron Age were distinguished: 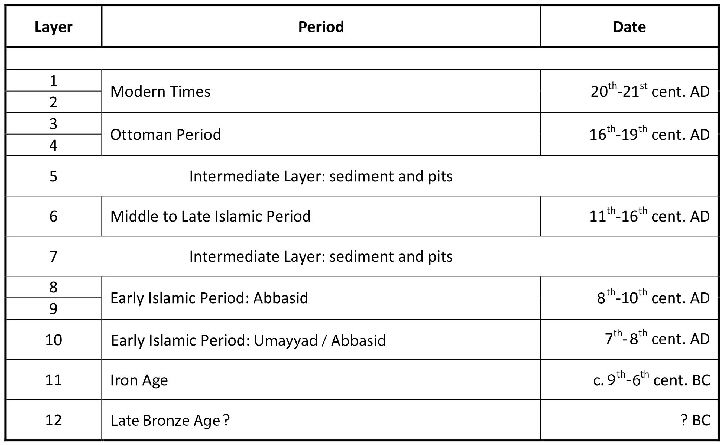 Stratigraphy of Area BA-3 after season 2013.

Surface layers 1 and 2 consisted of recent debris and pits. They covered layers 3 and 4 which contained mainly fallen bricks and just a few intact building remains. Based on pottery finds they can be dated to the Ottoman period; characteristic were green to green-turquoise glazed vessels as well as plain jars of the so-called Kurdish ware. Due to ancient pits the pottery material was mixed with older ceramics.

Intermediate layer 5 separated the Ottoman horizon from the next occupation layer 6 with its parts of burnt brick walls connected to a thin pebble floor.

Another intermediate layer 7 covered layers 8 and 9, which provided the most substantial architecture of the Islamic period in Area BA-3:

Layer 8: A narrow southward sloping street was flanked by two stone foundations. It was a thick compound of pebble subfloors, from which derived great amounts of glazed sherds, animal bones and iron fragments. The space east of the lane was obviously a kitchen area fitted with an oven within a rectangular ash-pit, and next to it a fireplace framed by burnt bricks on three sides. On the floor next to the oven, parts of a moulded globular bottle were found A house of an older phase of layer 8 was covered by the street’s filling. Early Islamic glazed pottery was found between the building foundations. 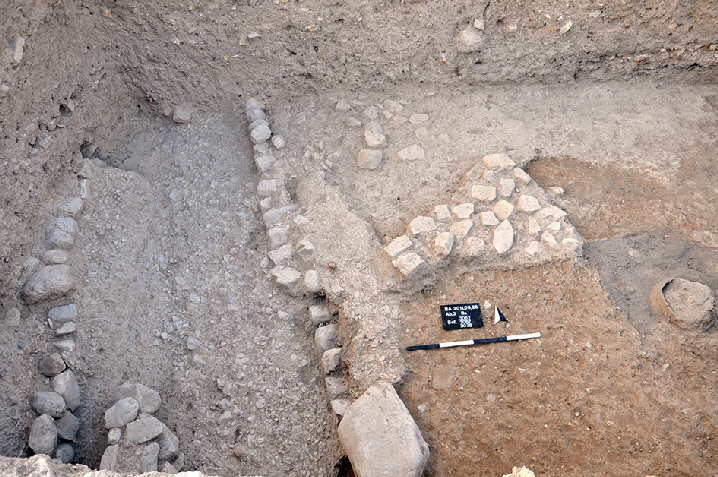 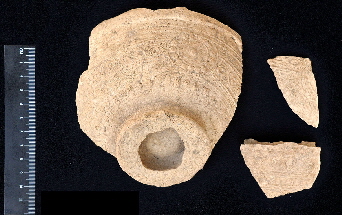 Layer 9: Three rooms of a large building structure were partially exposed. From its walls, especially the stone foundations have been preserved; most of the above mud brick construction was eroded. At least three occupation levels were observed; the original floor consisted of stamped mud on top of a rock-and-pebble-pavement. The largest room’s function as a kitchen is indicated by two tanoor-ovens. Pottery from layer 9 is often glazed, but decorations of finger prints and nail impressions, and some double grooved rims also appear. Therefore, a dating to the early Islamic, i.e. Abbasid period is most likely (there is no evidence for Sasanian presence). 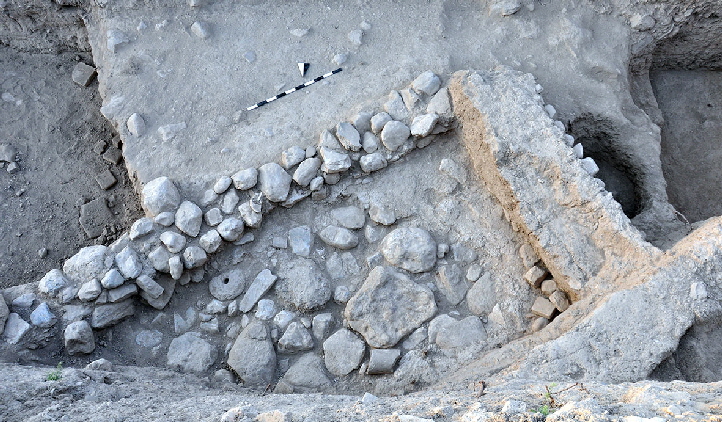 Stone foundation and floor in a room in layer 9.

Layer 10 was free from glazed sherds, and represents the first confirmed pre-Islamic occupation on the citadel. A strong impact of fire was observed in the eastern part of the trench. 14C analysis of burnt wooden beams allows 2-sigma dating 675-725 AD or 740-770 AD. Further west three mud brick walls, but no connected floors were excavated. The most substantial wall was built of bricks of a format 36 x 36 x 10-12 cm. Its face was in good condition, but did not bear any traces of mud plaster; the wall is therefore interpreted as foundation. The layers running against it yielded Iron Age pottery, and in one of the joints was found a fragment of an Assyrian Palace Ware beaker. 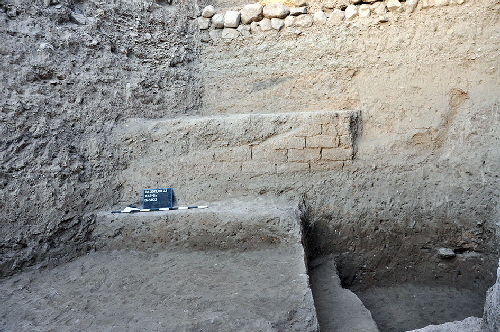 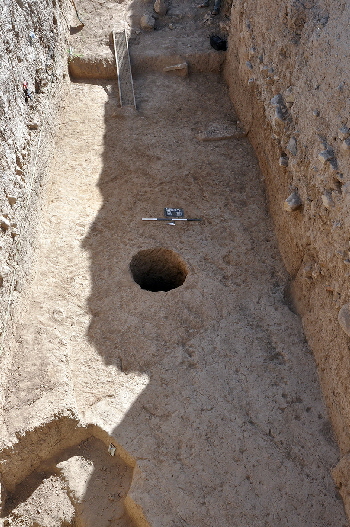 Iron Age mud brick wall in layer 11 (in the lower part of the picture).