The surface layer of Area BA-5 was badly affected by looting pits, and therefore consisted of debris and mixed material of various periods.

At least, two main occupation phases were clearly distinguished: In the upper layer, part of a cemetery was exposed. Its nine flag stone covered burials were of typical Islamic character, in NW-SE-orientation with view towards Mecca, and without any grave goods. They greatly disturbed the earlier layer, which revealed three large kilns. They were partially exposed, and appear to have been in use more or less contemporary with each other. The pottery from within the burning chambers is Islamic. 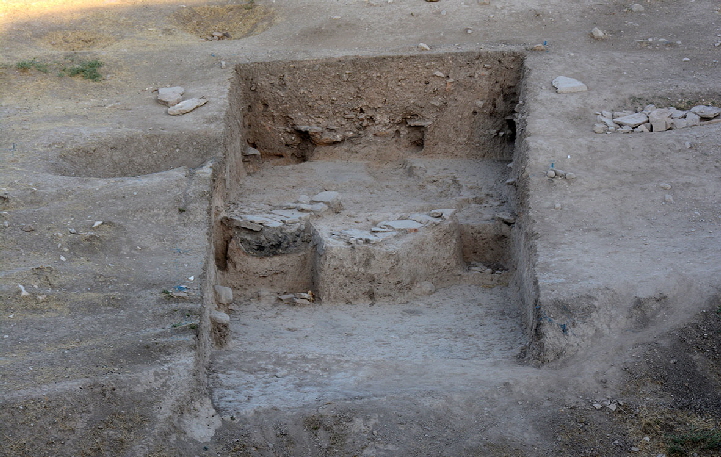 Islamic graves covered with stone slabs, and a pottery kiln (section below the left grave).

Patches of different floors were excavated in the Iron Age horizon. One of them consisted of a mud brick substructure covered with a well-conducted surface of mud plaster; directly on top of it was sat a tanoor containing a beaker and other Iron Age pottery. A stone pavement was observed in the southeastern corner of the trench, reminding of those in Area BA-1 and BA-2. A mud brick feature directly beneath the stones comprised mixed pottery characteristic of the 1st and 2nd millennium BC with an overweight of the latter.

Three floor levels associated with several mud brick foundations were distinguished. The pottery from these floors and the soil layers between them dates to the 2nd millennium BC.